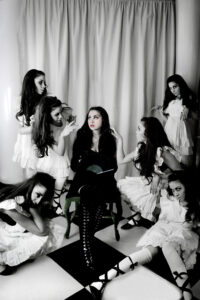 Nikdesign, aka Nik,  started his work back in the 90’s with painting, computer graphics and analogue photography, creating artwork for bands and club events. In the period 2001-2003 he began developing his skills in the digital photography world, working in the fields of artists and bands, artistic and conceptual photography.

Soon he started shooting for some local magazines, adding fashion and emotive portraits to the portfolio, resulting in commersial/advertising jobs. In 2004 he was discovered by the upcoming swedish Nocturnal Models agency (a.k.a. The Core) where he quickly buildt a portfolio with some of the pioneer models and designers in alternative and latex fashion. He became one of the top photographers in his field in his homecountry.

In 2007 Nikdesign were already one of the pioneers of latex fashion photography, long before Lady GaGa and Watchmen hit the commercial scene and people would recognize latex as something a bit mainstream rather than underground and obscure. His name has since spread throughout Europe in the alternative fashion industry. He has been published in Rolling Stone Magazine, Marquis, Dark Spy, Skin Two to name a few and he has been working with many of the alternative top models. He has worked for designers like Atsuko Kudo (Lady Gaga), House Of Harlot (Christina Aguilera) and swedish Naucler Design.

Alongside the alternative fashion scene Nikdesign has also specialized in custom band and artist photos. Some of his works include bands like The Sisters of Mercy, Amon Amarth and the legendary The Beach Boys. Nikdesign also has an interest in fine arts and artistic photography and in 2010 he also got back to directing music videos.